Abies alba is an evergreen Tree growing to 45 m by 15 m at a fast rate.
It is hardy to zone 4 and is not frost tender. It is in leaf all year, in flower from April to May, and the seeds ripen from September to October. The species is monoecious and is pollinated by Wind.
Suitable for: light , medium and heavy soils and can grow in heavy clay soil. Suitable pH: acid and neutral soils. It can grow in full shade semi-shade or no shade. It prefers moist soil. It cannot tolerate atmospheric pollution.

Landscape Uses:Screen, Specimen. Prefers a good moist but not water-logged soil though it tolerates most soils except infertile sands and peats. Grows well in heavy clay soils. Prefers a slightly acid soil, with a pH down to about 5, and a north-facing slope. Plants are very shade tolerant and this species has often been used to underplant in forests, but growth is slower in dense shade. Intolerant of atmospheric pollution. Requires a generous rainfall and a sheltered position. Intolerant of windy sites. The silver fir is a very hardy plant when dormant but it comes into growth in April and is then susceptible to damage by late frosts and aphis. This species is particularly subject to aphis infestation in many parts of the country, and is also prone to dieback and rust caused by fungal infections. Trees are slow growing for the first few years but from the age of around 6 years growth accelerates and height increases of 1 metre a year are not uncommon. Grows best in moist valleys in Scotland and in S.W. England where it often self-sows. This species also thrives in E. Anglia. Another report says that this species is not happy in the hot, dry, Lower Thames Valley, and does not thrive in many low-lying and frosty parts of southern England. It has been planted as a timber tree in northern and western Europe. It is also commonly used as a 'Christmas tree'. This tree is notably resistant to honey fungus. Trees should be planted into their permanent positions when they are quite small, preferably between 30 and 90cm in height. Larger trees will check badly and hardly put on any growth for several years. This also badly affects root development and wind resistance. Unlike most species of conifers, this tree can be coppiced and will regenerate from the stump. Plants are strongly outbreeding, self-fertilized seed usually grows poorly. They hybridize freely with other members of this genus. The cultivar 'Pendula' used to be widely planted for ornament, shelter and timber but because it is now susceptible to damage by Adelges nordmannianae it is seldom planted. Research is going on to find provenances that are resistant. Special Features:Not North American native, There are no flowers or blooms. 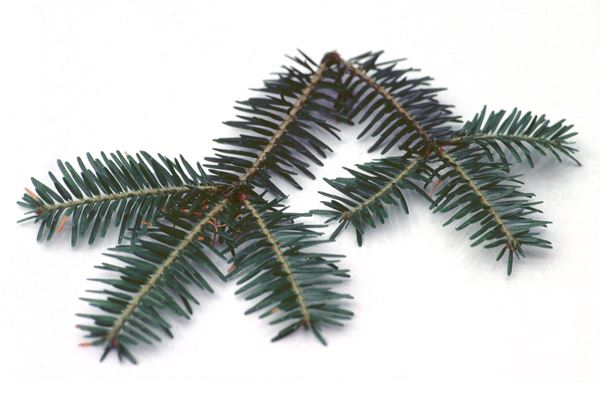 A product of Cooperative Knowledge in collaboration with: